When you think of exercise classes for the 8- to 13-year-old set, you probably think “ballet” and “karate.” You probably leave instruction in those fields to the kinds of niche studios that have been catering to children’s physical activities for decades. But things are changing in the world of kids’ calisthenics. Classes are no longer limited to the traditional ballet and karate. Now, kids are engaging in workouts that have fueled adult fitness for a while; such as cycling, Zumba, and CrossFit. Those workouts are happening not at kids’ boutiques, but in health clubs, gyms, and fitness outlets that are used to serve an adult population almost exclusively. The New York Times recently published an article about the phenomenon (and you know something is becoming a trend if the New York Times is reporting on it). The article features several gyms of various sizes and orientations that have launched classes created for adults, which were then subsequently adapted to meet the needs of smaller, more energetic types. Exceed Physical Culture, in New York City, is one of them.

Since 2012, the gym has offered adult classes involving jump ropes, monkey bars, and kettlebells. Soon after opening, owner Catherine Rocco discovered that parents seeking after-school activities for their kids were bringing them in and expecting to sign up. Rocco and her co-owner responded to that demand by creating a class for ages 8 to 13. Very soon after, they found themselves offering five classes per week for children only, and another for families on the weekends. AKT in Motion is the second company that offers classes just for kids. Based in New York, the dance cardio studio launched a regular eight-week session for children this past spring. Capitalizing partly on shrinking physical education time at school and on those late-afternoon hours when gyms and similar venues tend to get quiet, companies like these are finding kids eager for physical outlets that are not necessarily team or competition focused.

They’re finding parents eager for activities that keep their children happy, busy, and physically fit. That last point is key: In an era when obesity among children and teens is at an all-time high, parents want to get kids hooked on exercise early. According to the Times article, many parents take that a step further by enrolling their kids in classes at a gym. Parents are trying to convey a sense that getting a membership at a place where you can work out regularly is simply a normal part of life.

This is good news for gyms, health clubs, fitness centers, and other alike. Children’s classes pull in no less revenue than adults’ classes! In fact, they create a whole new revenue stream because they engage a separate segment of the population. Also, they offer venues the chance to create loyalty among a clientele that might develop those early gym-going habits their parents are hoping for and then stick around for a long time. The upshot? If you haven’t yet opened your doors to young ones, it’s time to sit down and start strategizing about how you’re going to do so. Start small, like the way Exceed Physical Culture did: Launch just one class, but have a plan for expanding. Because chances are, you’ll need to do so pretty quickly. 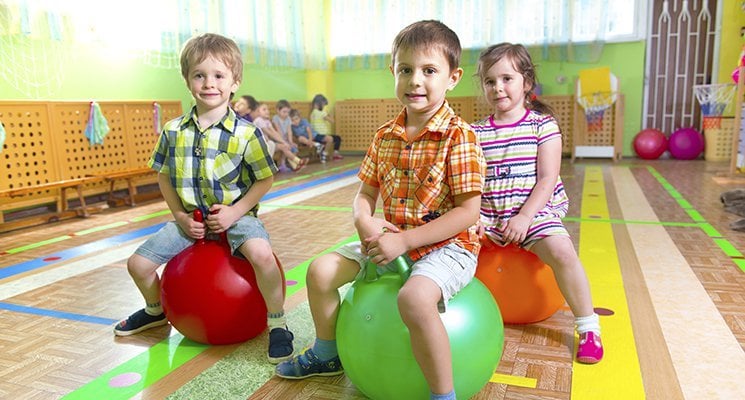 Earlier this year, reassuring news about childhood obesity emerged: For 2- to 5-year-olds, rates have plummeted 43 percent in the past decade. The data comes from a major federal health survey and is the first indication that America may be turning the corner on the childhood obesity epidemic. Given evidence that children who are overweight or obese at 3- to 5-years old are five times as likely to be overweight or obese as adults, this is very hopeful news.
But we’re not in the clear yet. It’s still the case, according to the Centers for Disease Control and Prevention (CDC), that 20.5 percent of 12- to 19-year-olds—or 1 out of every 5 kids—are considered obese. Moreover, the CDC reports, only 12 percent of kids ages 12 to 15 are getting the amount of moderate to vigorous physical activity recommended by federal guidelines: 60 minutes each day. The consequences of childhood obesity, or simply of too little activity in childhood, can be disastrous later on: cardiovascular disease, diabetes, bone and joint problems, sleep apnea, poor self-esteem, stroke, cancer, osteoarthritis—the list goes on and on.
Happily, health facilities, and in particular sports facilities that train youth, can make a big difference. First, help spread the word: Send newsletters, post on social media, hang up flyers in your facility, put up a billboard-sized sign in your window—however you do it, get the word out there that there is a problem. Use the numbers the CDC provides (they’re sadly impressive—for example: In 2010, more than one-third of American children and adolescents were overweight or obese). Also mention the good news: The fact that obesity rates for young children have dropped can be offered as a source of hope, and as motivation to continue making improvements.
Also, explicitly describe how your facility helps combat the dire figures. List the classes you offer that keep kids moving for at least 60 minutes; highlight any special deals parents can take advantage of. Invite new students in for free trial classes. Post videos showing kids having fun at your facility. If you’re a health club or fitness center that does not cater to kids, get the word out there anyway—and then explain why it’s crucial for parents, teachers, and other adult role models to stay in shape if they want future generations to stay in shape.
You can also consider doing what AussieFIT, a health club with two venues in Ohio, has done. In response to the CDC’s 2012 report, AussieFIT’s founder, Geoff Dyer, created a fitness initiative for local teens, offering free summer memberships to kids between the ages of 12 and 17. If such a program is impractical for your facility, perhaps there’s other programming—even if only educational workshops—you can offer.
If you help share the information that’s out there, show your members and clients (and potential members and clients) that you care, offer ways to make meaningful changes, and provide a free class or lecture to get folks started, you’ll be well on your way to both making a difference and boosting business. Recently, the Centers for Disease Control and Prevention (CDC) released troubling data: Only about a quarter of kids ages 12 to 15 are getting the amount of moderate to vigorous physical activity recommended by federal guidelines: 60 minutes each day. This follows a report the organization issued last year, revealing that childhood obesity has more than doubled in children and tripled in adolescents in the past thirty years. We all know where childhood obesity, or simply too little activity in childhood, can lead: cardiovascular disease, diabetes, bone and joint problems, sleep apnea, poor self-esteem, stroke, cancer, osteoarthritis — nothing good.
END_OF_DOCUMENT_TOKEN_TO_BE_REPLACED

In New York City, it’s common for schools to raise funds by holding yearly auctions. In the months leading up to an auction, parents stump all around town, trying to win donations from local businesses so auction attendees will have a wide variety of items on which to bid. Common donations include free piano lessons, handmade jewelry, restaurant gift certificates — and month-long gym memberships.
END_OF_DOCUMENT_TOKEN_TO_BE_REPLACED

It’s back-to-school month — and Childhood Obesity Awareness month. Even if your fitness facility caters mostly (or exclusively) to adults, you can contribute to the effort to draw attention to childhood obesity and its devastating consequences.
END_OF_DOCUMENT_TOKEN_TO_BE_REPLACED

Mother’s Day is a holiday that always makes me cringe a little bit (and not just because I’ve usually forgotten to send a card to my mom). What I don’t like about it is that it encourages showering mothers with gifts we really, truth be told, don’t need. Flowers, chocolates, breakfast in bed? No. What every mother I know truly needs, more than anything else, is time — and, in particular, time to work out.
END_OF_DOCUMENT_TOKEN_TO_BE_REPLACED

My son’s in first grade, and it’s his spring break. I don’t love traveling during spring break, given how crowded attractions can get and how miserable airports can be. I prefer to save the travel for off months and arrange fun things for us to do near home instead. Because it’s just him and me, and because I want to take advantage of the fact that he’s not yet embarrassed to be seen with me in public (I have another four or five years, right?), we’re pretty much attached at the hip during times like these. It’s all well and good, but what happens when I need a workout? He knows how to run me around in the park, that’s for sure, but sometimes it’s just not enough (…)
END_OF_DOCUMENT_TOKEN_TO_BE_REPLACED

Recently, Highmark Blue Cross Blue Shield awarded $125,000 to nine schools in Western Pennsylvania to help fight childhood obesity. This got me thinking. Childhood obesity, according to the U.S. Center for Disease Control and Prevention, has more than doubled in children and tripled in adolescents in the past thirty years. The percentage of children aged 6 to 11 years in the United States who were obese increased from 7 percent in 1980 to nearly 18 percent in 2010. In 2010, more than one third of American children and adolescents were overweight or obese. What are we doing to our kids? […]
END_OF_DOCUMENT_TOKEN_TO_BE_REPLACED

Everything that's happened this year has created a defining moment for the fitness industry, shaking the traditional models up and presenting a plethora of opportunities for entrepreneurs willing to exercise their business muscles. Check out this article from Entrepreneur for more trends impacting the personal fitness industry. ...

The Trends Shaping the Future of the Personal Fitness Training Industry

This year's shift to digital is shaking up traditional fitness industry revenue models and presenting a plethora of opportunities for entrepreneurs willing to exercise their business muscles.
View on Facebook
·Share

Share on FacebookShare on TwitterShare on Linked InShare by Email

This website uses cookies to improve your experience while you navigate through the website. Out of these, the cookies that are categorized as necessary are stored on your browser as they are essential for the working of basic functionalities of the website. We also use third-party cookies that help us analyze and understand how you use this website. These cookies will be stored in your browser only with your consent. You also have the option to opt-out of these cookies. But opting out of some of these cookies may affect your browsing experience.
Necessary Always Enabled

Any cookies that may not be particularly necessary for the website to function and is used specifically to collect user personal data via analytics, ads, other embedded contents are termed as non-necessary cookies. It is mandatory to procure user consent prior to running these cookies on your website.